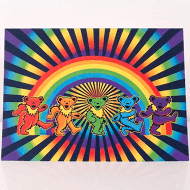 Erich received his Master’s Degree in English from Frostburg University in MD where he was also an adjunct Professor at that very same University. He enjoyed bicycles and had a passion for the Bicycle Recycling Program at the Pajama Factory in Williamsport as head mechanic. Erich had an eclectic taste in music anywhere from jazz to the Grateful Dead.

He was preceded in death by his father Robert W. Matz.

In lieu of flowers, donations may be made in Erich’s memory to the Williamsport Bicycle Recycle, 1307 Park Ave, Williamsport, PA 17701

Friends and Family are invited to attend a Tributes of Life memorial service at 2:30pm on Saturday, Sept. 7 at the Maneval Allen Redmond Funeral Home, 500 West Fourth Street, Williamsport. Pastor David Marcello will be officiating the service.

Please share your memories of Erich and condolences with his family at www.jamesmaneval.com

To send flowers to the family or plant a tree in memory of Erich E. Matz, please visit our floral store.